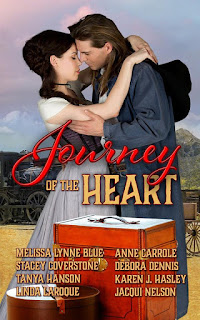 My short story, When Love Comes Calling, is in the western historical romance anthology Journey of the Heart. I have been wanting to write Callie's story for some time and this anthology seemed the perfect place for it.


Becoming a Harvey Girl has been a lifesaver for homeless Callie Rhinehart. Working in the Harvey House Restaurants has provided a roof over her head, the security of decent pay, and a path for a respectable career. When handsome widow Frank Sutton sits at her counter with a little boy in need of a mother, Callie’s carefully laid plans are threatened. But despite her growing feelings for the rancher, can she risk giving up her career for a marriage of mere convenience and leave her future in the hands of any man? It’s the 1880’s after all.

It’s true that Frank originally pursued Callie because he needed a mother for his child, but he’s fallen in love with her independent spirit. Competing with another man for her affections is one thing, competing with the Harvey Company is proving to be quite another.

I have always been fascinated with the Harvey Girls--young women who would never have an opportunity otherwise to leave home for a respectable position out West. Just like teachers and mail-order brides, these women took their fate in their own hands, ventured West and often found love in the waiting arms of a cowboy, rancher, or railroad man.

There are some excellent books on the Harvey Girl experience including The Harvey Girls by Lesley Poling-Kempes and Appetite for America by Stephen Fried. The Harvey Girls were often the civilizing force in the towns where they work. Will Rogers exclaimed that Fred Harvey..."kept the West supplied with food and wives" (Poling-Kempes p. 102) Callie Rhinehart will be no exception!

For sale on Amazon