4 DAYS left to NOMINATE THE MAVERICK MEETS HIS MATCH

THE MAVERICK MEETS HIS MATCH has only 4 days left in Kindle Scout and unfortunately, I don't think there is enough momentum to put it over the threshold necessary for a Kindle Press contract. And not being very proficient in publicity hasn't helped.

But I have learned a lot regardless of the final outcome.

First, it has been much easier for me to ask people to nominate the book for which they have the potential to get a free e-copy than to ask them to buy my book :)

Second, this campaign has gotten me out of my comfort zone and as a result I've tried new things--Fivver promotions, for one. One was very successful but the other two, not so much. I've done Facebook Ads and they have been more successful when sent to followers and their friends than to "targeted" audiences. A smaller audience has actually produced better results. But it is a lot of money per nomination received so not sure I will do it again. Tweeting hasn't really produced anything, but it is easy and simple so I'm still doing it.

Third, I realize I will need a lot of promo help when I do launch this book so I will be looking around for a promo company to help with that campaign.

Fourth, I have some really great friends, virtual and in-person, who have helped get the word out and I appreciate their efforts on my behalf!

Hanging in there until the end--Hugs, Anne 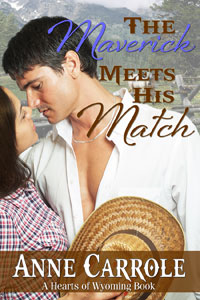 Posted by Anne Carrole at 1:58 PM No comments:

In case you'd like to nominate THE MAVERICK MEETS HIS MATCH, (and if the book is selected by Kindle Press you would get a free kindle copy) here's the link:
https://kindlescout.amazon.com/search?q=The+Maverick+Meets+His+Match

Posted by Anne Carrole at 1:43 PM No comments: