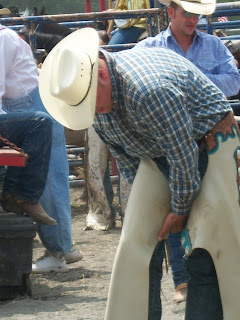 Chaps are not just for decoration though they can be pretty decorative. They help to protect the cowboy’s legs from getting cut up, whether from thorny bushes on the range or the horns of bucking bulls at the rodeo. There are different styles of chaps but rodeo cowboys like my character, Clay Tanner, in Re-Ride at the Rodeo usually ride with batwing chaps. Barrel racers often wear chaps too. Batwing chaps only have a couple of fasteners to go around the thigh and their loose fit allows the air to circulate. It’s also easier to mount a horse or bull with batwings and because they are loose they allow for the spurring movement that is part of score when riding broncs.

As the picture below illustrates, they look a lot like batwings when in motion. 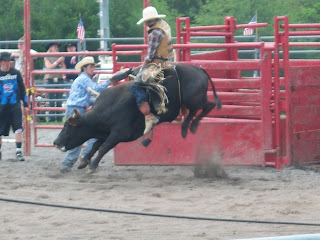 In the Old West, there were several versions that were popular depending on the region. Stovepipe or shotgun chaps were straight and narrow and were used by Texas cowboys beginning in the 1870s. 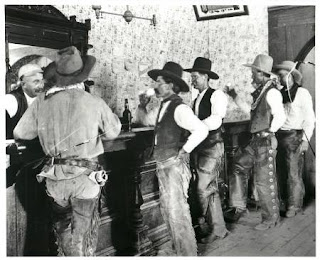 Chaps influenced by the vaquero tradition are the shorter chaps called Chinks and the slightly longer Armitas which enclose the leg and have to be put on like pants. The first guy in the photo to the right looks like he might have on Armitas.

Woolie chaps were used mainly by plains and mountain cowboys. Made of angora wool on hide, they were the warmest of the chaps—good for those cold winters in the Rocky Mountain states.

Chaps aren’t exactly cheap. Though a thrifty cowboy can buy a used pair of chaps for around $100 on e-bay if he’s not particular, a custom hand-made pair can run upwards of $250 to $350 or more. But then you can have it decorated with different colored fringe, add conchos, a fancy buckle and really express yourself. You could blow a day’s worth of hard-earned rodeo winnings just on a slick pair of chaps. Dress 'em up cowboy!
Posted by Anne Carrole at 2:17 PM No comments:

Who Rides Tall in the Saddle?

In Re-Ride at the Rodeo, Clay Tanner is a Texas rancher who has come to the saddle bronc event to earn some much needed money. At six feet, Clay’s not overly tall by hero standards but pretty tall by rough stock cowboy standards.

Take the current top ten saddle bronc riders. Only Anthony Bello tops out at six feet. Instead, 5’8” seems more the median height with Cody Wright, Samuel Kelts, Bradley Harter, J.J. Elswhere and Rod Hay, all either in the top ten or past NFR winners, reaching those heights.

Why is being a little shorter an advantage in rough stock riding?

http://www.shortsupport.org provides an answer: Shorter people of the same proportions as taller people have many physical advantages based on the laws of physics, and these advantages are supported by many researchers. Shorter people have faster reaction times, greater ability to accelerate body movements, stronger muscles in proportion to body weight, greater endurance, and the ability to rotate the body faster. They are also less likely to break bones in falling. As a consequence of these physical attributes, shorter people can excel as gymnasts, divers, skiers, martial artists, rock climbers, figure skaters, rodeo riders, soccer players and long distance runners.

So where do all those really tall cowboys go? Those who participate in the timed events (where the cowboy and his horse team up) tend to top the height scales of the rodeo cowboy. The current top three steer wrestlers and tie-down ropers all measure out at six feet or more.

That’s not to say Clay won’t be successful. Technique is more important in saddle bronc riding than in either bare back riding or bull riding. And tall cowboys sure look good when they mark out and do the required leg action in the event. Saddle bronc calls on traditional cowboy skills (no one had to ride bulls in the Old West) for breaking in a horse and is considered the hardest rough stock event to learn. But once you learn, they say, it’s easier to perfect. So how is Clay going to do in meeting the eight second challenge? You'll just have to read Re-Ride at the Rodeo to find out!
Posted by Anne Carrole at 7:39 PM 1 comment: 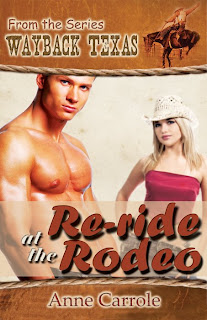 My cover is here for Re-Ride at the Rodeo, part of the Wayback, Texas series from The Wild Rose Press! What do you think? Think Dusty will take a re-ride on love with him? Would you?
Saddle bronc rider Clay Tanner is looking for a good time and the tempting little blonde who’s working the beer concession at the rodeo looks like she could use one—except she turns him down. Feeling like he’s been bucked off before the eight second buzzer, Clay’s betting he can score if she’ll give him a re-ride. But qualifying may call for more than he’s prepared to give.

Dusty Morgan’s nonplussed when hard-bodied cowboy Clay Tanner hits on her. She doesn’t exactly have the kind of figure that attracts Texas cowboys. Besides, even though Clay’s deep timbered voice sends tingles clear to her toes, he’s an undependable rough stock rider and a player to boot. Though he may be what she desires, Dusty knows from experience he isn’t what she needs—or is he?
Drop me a comment and let me know what you think! Hot enough for you!:)
Posted by Anne Carrole at 10:17 AM 2 comments: