How Women Fed the Western Expansion: The Harvey Girls


Waitressing may not seem an unusual occupation for a woman these days, but in the late 1800s, a woman who served the public in an establishment most likely would have been a dance hall girl in a saloon. That changed when Fred Harvey, an Englishman, began to open up The Harvey Houses along the Santa Fe Railroad line starting in 1878. Harvey was one of the first to employ women of “good character” to serve the railroad patrons who were traveling west over several days where stopovers to eat at a respectable and well-ordered establishment were a welcome respite. With the founding of the Harvey House restaurants, hotels, and resorts, Fred Harvey and the Santa Fe Railroad also began an experiment in something new for the Wild West—tourism.

In keeping with the age, Fred Harvey initially employed men and only men to work in his restaurants. But after a midnight brawl by waiters at his Raton, New Mexico establishment, Fred Harvey took the advice of his new manager and hired women because they were less likely “to get likkered up and go on tears…Those waitresses were the first respectable women the cowboys had ever seen—that is outside their own wives and mothers. Those roughnecks learned manners.” (Quoted from Tom Gable as cited in The Harvey Girls: Women Who Opened The West, by Lesley Poling-Kempes, p.42)

These upstanding waitresses were popular with both patrons and the community to such an extent that Fred Harvey decided to replace the waiters in all his restaurants with women. A major obstacle would be convincing single women of good virtue to venture into the rough and ready frontier towns filled with saloons and the cowboys, railroad men, and prostitutes who frequented them.

Fred Harvey sought “women who were well educated (in the 1880s, this meant having completed high school or at least the eighth grade) and exhibited good manners, clear speech, and neatness in appearance. Vulgarity of any kind would not be tolerated. Upon acceptance, a young woman usually had only twenty-four hours to say her goodbyes at home before she began rigorous training. When a Harvey Girl signed her contract for twelve, nine, or six months, she agreed to learn the Harvey system, follow instructions to the letter, obey employee rules, accept whatever locations she was assigned to for work, and abstain from marriage during the duration of her initial contract.” The Harvey Girls: Women Who Opened The West, by Lesley Poling Kempes, p. 43

Harvey Girls worked hard, putting in a good day’s labor, though every account says that Fred Harvey was a fair employer who treated his staff with respect and care. In most cases, a Harvey girl was required to work two to three meal shifts a day with just thirty minutes to feed upwards of 50 passengers at a time over eight trains, but there were plenty of staff to make it happen, from cooks to butchers to busboys and from fifteen to thirty Harvey Girls per establishment. There was an opportunity for promotion up the ranks and, on rare occasions, a woman could even become a manager where she would receive equal pay to a man—something often not true today.

Well aware that in the West, particularly, a waitress was often thought to be a prostitute as well, Fred Harvey lifted up waitressing to a professional standard by mandating that these single women reside in Harvey House dormitories on-premise in “beautiful and well-kept rooms” under the guardianship of a house mother enforcing a strict curfew. Adhering to a universal Harvey Girls uniform, a Harvey Girl presented the picture of virtue with no make-up allowed and starched black and white skirts and bibs and aprons with hems no more than eight inches from the floor. Enforcing high standards assured the public that these were women of good moral character to be treated with the respect due to a lady.

Thousands of women applied during the Harvey House period spanning 1883 until the 1950s. Here was an opportunity for independence previously unavailable to women, with the exception of becoming a teacher.

Harvey Girls were paid an average of “$17.50/month” with free room and board and railroad passes. Compare this to the cowboy at the time who generally earned about $30/month with keep.  Still, for a woman, these were considered good wages in a protected environment with the added bonus of adventure and, possibly, a marriage proposal. Minnie O’Neal became a Harvey Girl around 1885 in Raton, New Mexico, and ended up married to the ranch foreman of Senator Stephen Dorsey’s ranch. Her experience was not uncommon. “It is estimated that more than 100,000 girls worked for Harvey House restaurants and hotels and of those, 20,000 married their regular customers.”- http://www.florenceks.com/text/local/local_hh-girls.htm

Fred Harvey worked with farming schedules, allowing time off during summer months to those who were needed on the farm and replacing them temporarily with teachers who needed work during summer months. Particularly in later years and through the depression, The Harvey Houses were known to help employees, including women, obtain a college education in the communities that had colleges or universities, by providing accommodating schedules for those who wished to attend classes.

The Harvey Girls were immortalized in Sam Adams’ book of the same name and romanticized in the MGM movie starring Judy Garland where there was much singing and dancing but not as much hard work depicted as reality would suggest. The romance, however, appears to have been true. For those of you who have never seen the movie or would like a quick jog down memory lane, here is the movie trailer: https://youtu.be/xIEzMBEOkAc

The story of the Harvey Girls is one more example of women making their way out west for a new life in a role unthinkable at the time in eastern environs. As Will Rogers, an enthusiastic and loyal Harvey House customer, said: “In the early days, the traveler fed on the buffalo. For doing so, the buffalo got his picture on the nickel. Well, Fred Harvey should have his picture on the one side of a dime, and one of his waitresses with her arms full of delicious ham and eggs on the other side, ‘cause they have kept the West supplied with food and wives.”  (Quoted in The Harvey Girls: Women Who Opened the West by Lesley Poling Kempes, p. 102)

Besides Lesley Poling Kempes book referenced above, another good book about the Fred Harvey Company is Appetite for America by Stephen Fried.

My novella, WHEN LOVES COMES CALLING, is about the amorous adventure of a young woman who has become a Harvey Girl in 1884 Colorado just as the Fred Harvey Company was beginning to employ women as waitresses.

1884 Colorado
Working as a waitress at a Harvey House Restaurant out west has been a lifesaver for homeless Callie Rhinehart, literally. The position has provided a roof over her head, the security of decent pay, and a career with a reputable company after the death of her parents and sister. When handsome widow Frank Sutton sits at her counter with a sweet little boy in need of a mother, Callie’s carefully laid plans are threatened. But despite her growing feelings for the rancher, should she give up the security and independence afforded by the Harvey Company and risk a marriage of mere convenience to a temptingly handsome stranger?
It’s true that Frank originally pursued Callie because he needed a mother for his child, but he’s fallen in love with her independent spirit. Competing with another man for her affections is one thing, competing with the Harvey Company is proving to be quite another. 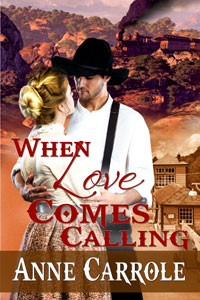 You can read an excerpt here: https://www.amazon.com/dp/B088KPTM6W

Posted by Anne Carrole at 2:30 PM No comments: