I’m trying my first Amazon giveaway and giving away 5 Kindle copies of LOVING A COWBOY, Book 1 in the Hearts of Wyoming series, to 5 lucky number winners via Amazon. If you have read Ty and Mandy’s story, this is Libby and Chance’s happily-ever-after. Click on over to sign up! It might be your lucky day. 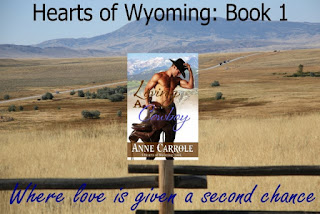 And if you have already read LOVING A COWBOY and enjoyed it, I would be so appreciative if you could leave a review for it on Amazon. Reviews are the best way for potential readers to know if they will like the book or not and Amazon favors books that have more reviews. Here's the link:
http://amzn.to/1PsYkvx

Thanks and hugs, Anne
Posted by Anne Carrole at 8:43 AM No comments:

FAIR PRICE FOR A KINDLE (EBOOK) EDITION OF A BOOK?

I was checking out how THE MAVERICK MEETS HIS MATCH was doing now that it was no longer on sale (99 cents). Predictably it has fallen to a rank between 60 and 80 in Western Romance now that it is back to its original price of $3.49

On its page, Amazon was advertising New York Times bestselling author Robyn Carr's newest book released by Harlequin titled: What We Find. I almost fell off my seat when I saw what Harlequin is charging for the Kindle edition of her book: $12.99--yes, for an e-book. And her ranking was a very respectable, and enviable, 235 in all books in the paid Kindle Store! More power to her and her publisher!

It just goes to show that if you write a good book, have built a large loyal following to propel you to that New York Times best selling author status, readers will pay decent money to read it.

Now, back to building that loyal following....
Posted by Anne Carrole at 8:55 AM No comments:

RESULTS OF AMAZON'S PROMOTION OF THE MAVERICK MEETS HIS MATCH

THE MAVERICK MEETS HIS MATCH was published by Kindle Press on January 26 (here's the link: http://amzn.to/1OZ2gDO ) and a little over a month later the book got its first promotion.
Promotion 1: The first promotion appeared on February 28th, one day after the Look Inside feature finally appeared on the book. (I am sure that, as a relatively unknown author, the lack of the Look Inside feature hurt sales in the first month of release but, as you will see, the promotions have more than made up for it.)

MAVERICK started climbing the charts on that Sunday. At first I thought maybe it was due to the Look Inside feature finally being functional but when it reached #3 (at about 8:00 pm that Sunday evening) in Western Romances and in the low 500’s overall, I knew that some sort of promotion had to have happened, likely a spotlight on the book for Kindle Fire users.
Promotion 2: On February 26th I was informed that MAVERICK had been selected for inclusion in Amazon’s 99 Romances for 99 cents each starting on Friday, March 4th and running for a month through to April 4th.

I had one week to line up advertising to promote the discounted price. I submitted requests to BookBub, which, I found out, Kindle Press did also. We both were rejected. I also submitted to E-reader News Today (March 13), Reading Deals (March 5), We Love Readers (March 8), Bookhearts (March 10), Choosy Bookworm (March 18), a Fivver FB posting/tweet (March 20) and another Fivver FB/Tweet posting from my favorite gig (March 25).

While I can’t say for certain what worked, I do believe that the blitz of promos in the first week helped keep it at #2 in Western Romance for that period and that the other promos did show a bump in ranking. In all I spent $154.25 on these promos.

In addition, I ran a boost of my Facebook posting announcing this discount/promotion from March 4 until April 1 at a rate of $10/day. The one day I took it down to $5 my ranking dropped. When I put it back up to $10, the ranking improved. I kept it at $10. It cost me $265. Running boosts of my Facebook posts promoting my book have been more effective for me than Facebook Ads. I have 2750+ fans on my Love Western Romances page and I boost the post to followers and their friends. I can tell when my boost has stopped because the book's ranking does sink perceptively.

I did a lot of "free" promo--posting in Facebook groups and on twitter and participated in two retweet parties--one on March 9 with MFRW authors and one on March 30 with Kindle Press authors.

I do believe that getting the word out about the promotion helped to sustain and perpetuate MAVERICK's ranking in the western romance category beyond just the 99 cent price since many books in the promotion did not seem to achieve similar results.

Thanks to Amazon, MAVERICK also landed as the number 3 or 4 book on the 99 Romances page throughout most of the promotion which had to help with visibility. Perhaps by starting out strong in the first week, MAVERICK had a leg up in securing a coveted front page spot, but whatever the reason, I am grateful for the visibility.

What I didn't do during this promotion month was promote via blog spots. I have personally found them a lot of work with minimal gain. I didn't join Net Galley for reviews or pay review sites (I might have been tempted if I didn't get this promotion.) I didn't pay for Twitter ads--I do promote on twitter but beyond re-tweet parties, I haven't found twitter that effective.

I won't find out how many books were sold until the end of this month as I am not sure how reliable those rank-to-sales calculators are but if they are reliable the book has done well. However, I already know my modest advertising investment has been worth it. MAVERICK reach #2  in Western Romances (number 325 overall) shortly after the 99 cents promo began and stayed there for six days! In fact, for the month of March it pretty much stayed in the top 20 of the best seller list (the first page) for Western Romances as you will see in the graph below. No advertising dollars were put behind it in these last few April days of the promotion and my rankings have dropped to between 20 and 40 in Western Romance. When I planned out my promotions I didn't know if they would be effective and I thought by the end of the promotion the reader pool could be exhausted.

I also have another book in the series that has certainly benefited from reader interest in MAVERICK and I have a third book that I am working on and plan to release this year so the money I spend is part of building the brand, as well as a loyal following as newsletter subscribers are also increasing as a result of readers finding this book.

Also during this promotion, Maverick went from having 9 reviews to 30 with an average rating of 4.6. This may not seem like a lot to some, but for this newbie author it is.

Below is a chart of the book's ranking in its western romance category for the month of March, with the ads noted so you can see the impact. (Note: the label "series" should be rank--I only realized that it said series after I was all done. A low number, obviously, is better).

If anyone has suggestions on other things I should have done, let me know. I am still in learning mode when it comes to book promotion. 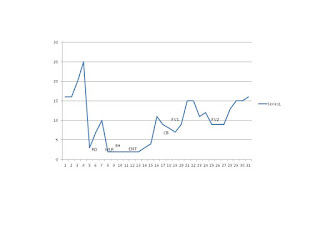