A Painter in the House

Ahh the smell of fresh paint and the tap, tap of another human in the house while everyone else is at school or work. We'll be selling our house in a year or two and as part of the long process of getting it ready for sale, we are having some rooms painted.

I know, shouldn't I wait until I'm closer to selling? The answer is yes--except these rooms are so awful with tons of furniture marks and lots of scrapes that I just can't wait any more. And since I'm having Easter this year, I wanted it done before that holiday.

Gratefully our painter, the European, is the nice quiet sort. Except for the paint fragrance, I could easily forget he is here. Except, of course, that my house is even more topsy turvey than usual given one of the rooms he is doing is our den--which is the center of our home.  My daughter parked herself on the covered sofa this morning and insisted she watch the TV just inches from her nose because "I"m a creature of habit, Mom." Wait until she finds out he's buried the TV under a load of vinyl and paint cloths.

Normally, I would do the painting myself--after all, I did when we first moved in a decade ago. But with writing, the day job, and a teenager who is learning to drive and wants to be in  the car every available minute, I've got more than enough on my hands. Besides, this guy is actually doing it right, spackling and caulking, sanding and priming. Amazing how much better it looks when you do it the right way.

So yes, I should have waited and let the new home owners enjoy it but I couldn't. I want those nice clean, perfectly trimmed walls for myself, at least for a little while.
Posted by Anne Carrole at 2:30 PM No comments:

Review: A Creed in Stone Creek by Linda Lael Miller

I love to read as well as write and one of my favorite authors, among many, is Linda Lael Miller. She's launced a new series, The Creed Cowboys and below is my review of the first novel just released this month, A Creed in Stone Creek.

Lawyer Steven Creed suddenly finds himself the guardian of a bright and precocious five year-old named Matt after the tragic death of his friends, the boy’s parents. Steven recognizes this is the most important role he’s ever going to play in life and, after legally adopting the boy, he moves to the small town of Stone Creek where his distant relatives, the McKettricks, live to start fresh, away from the painful memories. He’s given up a lot for Matt including the woman he thought he was going to marry until she found out about the package deal. But Steven did so without hesitation, because he loves the little boy and, besides, any woman who couldn’t love Matt wasn’t a woman he wanted to be with. Still, bringing up a rambunctious five year old as a single dad isn’t going to be easy. And then he meets Melissa.


Stone Creek’s prosecutor, Melissa O’Ballivan, has always had problems with commitment. No surprise since her mother walked out when she was little and her father passed away not too much later. Raised by her brother and surrounded by her two sisters, one of whom is her fraternal twin, family is very important to her. All of her siblings have found their soul mate and have started families of their own, apparently able to overcome their difficult childhoods. All of them but her. She seems to sabotage her relationships whenever someone gets too close. ConsideringStone Creek isn’t a hot bed of criminal activity, she doesn't have work to keep her mind off of her personal life. When the parade committee lassos her into being the chair, she can’t very well say she’s too busy, because she isn’t. Besides, a cute little boy, new to town and named Matt, seems to have his heart set on seeing that parade and how can she disappoint him—or his handsome father.

Steven is struck hard by the competent, independent-minded, and hard charging Ms. O’Ballivan but unfortunately she reminds him an awful lot of the career woman who just walked out of his and Matt’s life. He’d have an easier time keeping his distance if she weren’t so darn attractive and Matt wasn’t drawing pictures with Melissa as his “new mom.” But when a conflict over a case pits Steven and Melissa against each other, it’s clear that they see the world in very different terms. And compromise just doesn’t seem to be in Melissa’s vocabulary. Can these two find common ground and make a little boy, and themselves, happy?

This novel, the first in the Creed Cowboys series, contains strong, well-defined characters, a welcoming small town setting, and a sizzling romance. The opening scenes depicting Steven and Matt’s relationship are sure to bring a tear to the eye as Steven grapples with the emotional toll of Matt’s loss. I fell in love with Steven Creed in those scenes and, having taken the “Whose your cowboy?” quiz at Miller’s promotional site, http://takeacowboyhome.com/ , it was no shock that he’s my cowboy.
While I would have liked to see a little more turmoil in the later scenes where Steven and Melissa lock horns, the romance is what keeps you turning those pages. This book also introduces the two spirited and engaging brothers whose love life will be depicted in the next two books. With Miller’s signature high flying cowboys and the feisty women who tame them, this series is bound to be another winner.

Spring at the Philly Flower Show 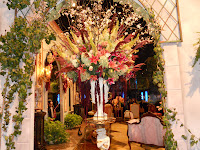 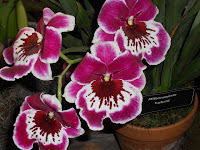 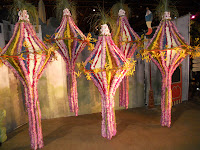 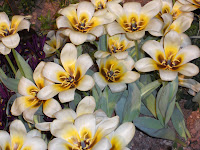 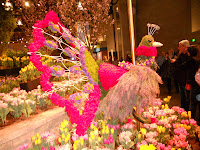 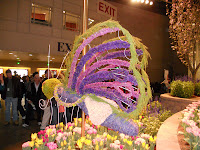 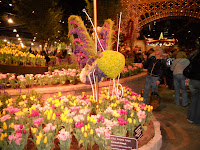 I definitely have spring fever after a trip to the Philadelphia Flower show! The theme was Paris and the flowers were spectacular. A nice break after a rainy, cold weekend. These pictures speak for themselves. Just lovely. Enjoy!
Posted by Anne Carrole at 8:25 PM No comments: