Rodeo Tidbits for Your Re-ride at the Rodeo 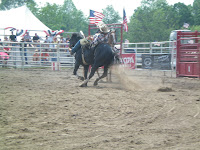 Wayback, Texas is The Wild Rose Press Series centering on the town of Wayback, Texas and its rodeo. For Texas towns, the rodeo provides not only something to do but a way to earn some much needed money. So you can keep up with what everybody is talking about in Wayback, I've compiled a list of western talk and rodeo terms listed below. How many do you know?

And don't forget that Re-Ride at the Rodeo comes out October 3rd! In Re-Ride at the Rodeo, Clay Tanner is a saddle bronc rider when he’s not tending to his ranch and Dusty Morgan staffs the beer concession for the Blue Bug Saloon when she’s not looking for a teaching job. Despite her work, Dusty has an aversion to all things rodeo, given her upbringing, and to rodeo riders in particular. Clay’s just looking for a good time and can’t imagine any woman turning him down, especially not the tempting little blonde spitfire. But Clay shouldn’t ask for a re-ride unless he’s prepared to bite the dust.

So here are some terms I compiled for you to ponder (and feel free to add your own!)
Arm Jerker: An animal that bucks with a lot of power

All Hat, No Cattle: All talk, no substance—think Washington politician

Bail Out: A horse that comes straight up on its hind legs when it leaves the chute before it starts to buck.

Bailing Out: Not to be confused with the above, this is when a cowboy intentionally jumps off a bucking animal.

Bite the Dust: Just what you think it means; that cowboy got bucked off that bronc and landed face first in the dirt. Ouch!

Buckaroo: A cowboy who does ranch work for a living. (A professional rodeo cowboy’s sole occupation is rodeo competition.) Clay is a buckaroo.

Blooper: Bet you could guess that this is an animal that doesn’t buck much; maybe just kicks a little and runs around the arena. The rider may stay on but the score won’t be a good one unless the animal is a good bucker. Half the rider’s score comes from how well the animal bucks. Tougher animal, better score and more chance to win big.

Cantle Boarding: When the backward stroke of the legs of a saddle bronc rider’s spurring motion reaches the saddle’s cantle.

Cowboy up: It means get ready to ride but also the grit, hard work and strong determination that marks the character of a cowboy.

Crow Hopper: Kind of fun to imagine how this term got coined. It’s an animal that doesn’t buck so much as jumps around stiff-legged instead. Bet they ask for a re-ride when they get one of these.

Go-round: A round of rodeo competition. A rodeo in which each contestant competes once has one go-round. The Wayback rodeo has two go-rounds. Clay has to stay around because his friend placed in the first go-round in bull riding. That’s how he gets to know Dusty just a little bit better.

Ground Money: Purse money split evenly among all event contestants because no single contestant qualified to win the purse.

Hang-up: When a bull rider falls off the bull and his riding hand gets stuck or “hung-up” in his bull rope. He often gets dragged along by the bull as a result. Hard thing to watch but amazingly, the bull riders usually walk away with just their pride hurt.

Jam: When a saddle bronc jumps high off the ground.

Out the back door: When a rider is thrown over the hind end of the animal—ouch!

Pulling leather: When a bronc rider holds on to any part of the saddle before the eight-second buzzer. This disqualifies him. Clay would never do that!

Re-Ride: If the bull doesn't do his job and the judges agree, you can get a second chance--a re-ride. Catch is that if you got a score, though likely a low one, on the first bull, you might get bucked off on the next ride for a no score or score even lower. It's the re-ride's score that will count, not the best of the two. So the choice for the cowboy often is--do I keep this low score or try for a better score knowing I risk getting no score at all on the re-ride. Much like Clay's dilemma regarding going after Dusty--again.

Rowel: A small wheel that forms the extremity of a cowboy’s spur. In rodeo, rowels are required to be free-wheeling and blunt so they don’t mark the horse. A competitor that uses spurs that will cause a cut is disqualified.

Rank Bronc: a bad one

Seeing daylight: When the rider leaves the seat of a bucking horse

Slick Heeled: A person not wearing spurs (see rowel above)

Slinger: A bull that tries to hit the cowboy with his head or horns while the cowboy is riding him. Ouch again!

Spurring Lick: When the rider’s movements are in rhythm with the bucking action of the animal.

Turn Out: When a rider passes on riding an animal he has drawn or the officials decide to give the rider a different animal. The bull or horse is released from the chute, without a rider, so he can be corralled back into the holding pen.

Now that you're all set for Wayback, Texas, got any terms of your own you want to share? Any one of the above that tickled your fancy?

Re-ride at the Rodeo, October 3rd, The Wild Rose Press


Posted by Anne Carrole at 6:47 PM No comments:

Will he get a Re-ride? Find out on October 3rd.

Just found out that my book, Re-ride at the Rodeo, will be out in just 14 days!!!

Then you can find out if true love can exist between an footloose cowboy and a cowgirl who wants home and family. This romantic love story turns HOT when they decide to take a risk--on themselves and love. But sometimes those risks are more than either bargained for. Maybe they both need a life lesson. Here's the blurb:
Saddle bronc rider Clay Tanner is looking for a good time and the tempting little blonde at the rodeo looks like she could use one—except she turns him down. Feeling like he's been bucked off before the eight second buzzer, Clay's betting he can score if she'll give him a re-ride. But qualifying may call for more than he's prepared to give.
Dusty Morgan is determined to resist the sexy rough stock rider staking out her station. She's vowed never to get tangled up with someone who makes their living through rodeo and she's not interested in a hit and run. Though he may be what she desires, Dusty knows from experience he isn't what she needs—or is he?
Just $3 to take a Re-ride at the Rodeo. Available October 3rd at The Wild Rose Press
Re-ride at the Rodeo is the latest installment in the popular Wayback, Texas series.
Now you know why I've been late in posting!
Posted by Anne Carrole at 10:59 AM No comments: