My short story, Ultimatum, the first prize winner of the annual Long and Short reviews contest is up on the site today, July 24th, as a free read--all 999 words of it. So if you're up for a Quickie, I hope you stop in at:

And let me know what you think!
Posted by Anne Carrole at 8:02 AM 1 comment:

For the Love of It! 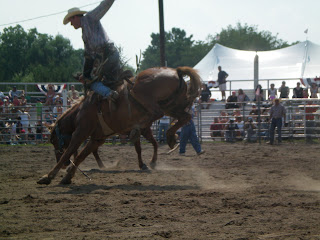 Rodeo riders have to love what they do because they sure aren’t in it for the money. Except for those who make it to the top (to the National Final Rodeo) a rough stock rodeo rider often pays out more than he wins.

First there are entrance fees that can run a $100 or more, depending on the level of the rodeo and competition. A few years ago, that’s what cowboys competed for—a chance for a piece of the purse they all paid into. Now, most of the larger rodeos, at least, supplement the purse, some to a significant degree now that there are national sponsors. 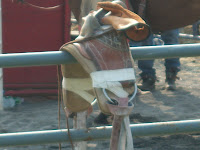 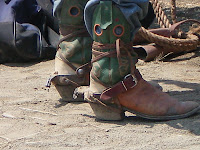 Then the cowboy has to look the part. Those Stetson hats that we writers like our heroes to wear cost generally between $150 and $200 though you can get a wool one for a lot less and a fancy beaver one for a lot more. Boots? A good set of croc boots could set you back over $400—and they laugh at city women and their Jimmy Choos! Then you’ve got to add spurs which can go from $35 upwards, depending on how fancy you want to get. I already discussed chaps a few blogs ago but that can add another $300 more or less. Cowboys may laugh at women for the price they’ll pay for a pair of designer jeans and high heels, but cowboys know a thing or two about what it costs to look good .

Travel expenses are added on top of all this. And they are extensive and getting more expensive with each fill at the gas pump. Rodeo cowboys can travel over 100,000 miles in a year if they are covering the National circuit (instead of a regional circuit). Most travel is by car or truck. To save on gas, cowboys carpooled usually two or three to a car. With gas prices going so crazy, it’s now more like four or six if they can all cram in. Then there’s the issue of sleep, if you aren’t driving all night to the next rodeo. This is when it’s good to have friends in a town but if not, you’ve got to spring for a hotel room which you’ll generally share with those same guys you car pooled with. Now you know why rodeo riders are a tight knit group. In close quarters like this there’s no room for quarreling.

Those that are well-heeled often fly to the big rodeos but that is the exception rather than the rule. And consider the expenses of those in the timed events where they need to haul their horse with them. Even for the top-earner of 2007, Trevor Brazile, expenses can significantly eat into winnings. A recent New York Times article, July 5, 20008, A Sport on the Move, a Rider Who Never Stops, listed Trevor’s income and expenses as follows:

Though Brazile earned more than $400,000 in P.R.C.A. events last year and another $150,000 in unsanctioned events, he pays a lot up front. He spent $65,000 in event fees, which was his top expense. At almost every rodeo, cowboys pay a fee for each event they enter. They need to perform well to make their money back.

This year, with diesel fuel at almost $5 a gallon, Brazile says he expects that to become his top expense. To keep those costs down, he stopped using one of his two trailers and began traveling more with his team roping partner, Patrick Smith. (Brazile also travels with his wife, Shada, and 7-month-old son, Treston.)

Brazile and Smith arrived in Santa Fe pulling Smith’s silver, four-horse Elite trailer behind a white Dodge truck that gets 8.5 miles a gallon.

And then there is the schedule they have to handle. In the New York Times article, Brazile outlined his schedule for this past 4th of July holiday period, known as Cowboy Christmas because of all the rodeos with big prize money that are around:

Then Brazile will get on another plane and fly to back to Greeley. “Or, if we didn’t make the finals at Greeley,” he said, “we’ve got a backup plan to go to St. Paul, Oregon, on the fourth and Molalla, Oregon, on the fifth.”

Brazile said he expected to have only four days off from competition this month. He will fight fatigue and injury.

That's what Brazile has to do to maintain his top earner status; that and competing in three to four events per rodeo! Being a top competitor has its rewards though. According to RodeoAttitude, Brazile collected $23,813 during the above time-period (coming in second for the holiday period to my favorite saddle bronc rider, Cody Wright, who won $24, 288 just competing in saddle bronc). Apparently Brazile had to go with his back-up plan, winning $9,467 in St. Paul Oregon. But oh that expense.

Even discounting the dangers, rodeo is a hard way to make a living for the majority of cowboys. Reminds me of an author’s lot. Those at the top may make good money (and work darn hard for it) while those of us trying to get to the top do it just for the love of it. Ride ‘em cowboy!
Posted by Anne Carrole at 5:29 PM No comments:

Just got the word that my short (and I do mean short) story, Ultimatum, just tied for first prize in the Long and Short Reviews first annual short story contest. I couldn't be happier since this was a particular challenge for me.

You had to write a story--beginning, middle and happily ever after ending--in 1000 words or less. Now, I'm known to be a little on the chatty side and my writing, at times, reflects that although I think I've gotten better over the years. To test that theory, I decided to try and meet their contest criterion and I guess I succeeded.

The story--and yes it's a western, what else?--will be run in all of its 999 word glory on the website on July 24th so I'll remind you all when its time. I hope you'll mosey on over and check it out. Let me know what you think of rancher Cole Hutton and lawyer Lila Parks.
Happy 4th of July!
Posted by Anne Carrole at 7:45 PM No comments: