Just got finished reading Tumbleweed, Jane Candia Coleman’s fictionalized version of the life of Allie Earp, the wife of Virgil Earp, based on Allie’s diaries. Though I love all things western, I’ve never really understood the overwhelming fascination with the Earp brothers. Now I do.

Besides the riveting eye-witness to history account of life in the west (she was in Deadwood when her friend and childhood hero Jim Hickok got shot in the back in addition to being in Tombstone and a lot of places in-between) this is a story of the life long love affair between an outspoken little bit of a woman and a tall, handsome and commanding lawman of the West.

Here’s a little snippet of the book so you can see what I mean:

“Virge watched me serving, still all twinkly-eyed, like he was waiting for me to say or do something, or like he was taking the whole of me into his head and wouldn’t forget. I’m old, but in my heart I’m that young girl, moving around my sister’s table, trying not to spill or make a fool of myself just because a stranger had knocked me endways.”p.57

Reads like a romance doesn’t it? But laced with a lot of history and perspective.

“But I told Virge how lonely it felt sometimes, knowing there wasn’t nobody but me, and that life went on no matter what.

He listened without saying a word, just listened, his head bent down toward me to catch every word. He always was a good listener, taking everything in before passing judgment. It’s what made him and his brothers good lawmen later. They never went off half-cocked like so many others—the outlaws, the crazies, the riff-raff that made up most of Tombstone and near every place else they ever went.” p. 62

Of course the events in Deadwood and Tombstone are all here—and a lot more. A woman’s point of view lends a different perspective than just who shot who and who was right or who was wrong. Allie believed, for instance, that Wyatt’s love affair with Sheriff Jimmy Behan’s lady (who later became Wyatt's wife) had a lot to do with increasing the tension in town. Allie’s story gives you lots of nuances to ponder. But most interesting, it gives you a multi-faceted portrait of men who meted out their own justice when they felt the law was either corrupt or ineffectual. And there in lies much of the interest in the West. A unique set of circumstances that tested men and women like no other period in our history. 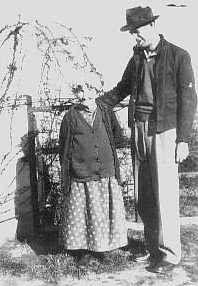 You can read a full review of Tumbleweed at http://www.lovewesternromances.com/bookreviews.html

Allie, toward the end of her life,with writer Frank Waters whose biography of her she later disclaimed.
Posted by Anne Carrole at 1:45 PM 3 comments:

Where Else Can You Find So Many Cowboys?

Nowhere but at the rodeo and that's where I was this weekend. Our local rodeo is on the small side but that allows me to get right up there and take some wonderful pictures of some very nice and accommodating rodeo riders. Lots of good action shots for my book video for Re-Ride at the Rodeo as well as just plain fun. Now this is the kind of research I can really get into.

Besides all the cowboys-who were just the nicest gentlemen--I really enjoy all their gear. All those cowboy hats, taped riggings and how about those two-toned boots--aren't they a hoot? And then there are those chaps. Fringed, dyed and decorated they really say ride 'em cowboy.

Take a gander and let me know what pictures you like best; give me some ideas for that book video.
Posted by Anne Carrole at 1:52 PM 3 comments:

Get Ready For A Re-Ride at the Rodeo--Enjoy Some Pics of My Favorite Cowboys!

Posted by Anne Carrole at 10:57 AM No comments: