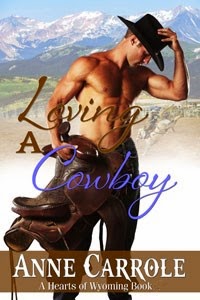 LOVING A COWBOY is now available at Amazon, B&N and iBooks. It is Book 1 in the Hearts of Wyoming series.

Saddle bronc rider Chance Cochran knows a bad omen when he sees one, and Libby Brennan isn't just a bad omen, she’s the woman he was married to, five years ago, for all of forty-eight hours—before her father dragged her away and started divorce proceedings.

It isn't by coincidence Libby Brennan shows up where Chance is celebrating the win that put him in the million-dollar cowboy class. Older and hopefully wiser, she’s come to clear up a legal technicality as well as ask his forgiveness. Then maybe she can move on with her life.

But saying she’s sorry won’t be enough to make amends to this cowboy who has endured a lifetime of people abandoning him. When Chance needs some help after sustaining an injury however, Libby may have a second chance—at love.

Would he stop? The silent question hung in the air while Libby watched him approach, her gaze riveted in his direction like a nail caught in a magnetic field.
Her foot was shaking like it was ready for takeoff. She felt like running. She knew she couldn't. Not this time.
"Imagine finding you at the Cattleman's Club after all these years."
That low, sexy male voice could still vibrate her heart. Libby struggled to hide any reaction as she looked up into the familiar stone-chiseled face and stormy gray eyes shadowed by a black Stetson.
"Congratulations," she managed to get out as Chance, dressed in a white shirt and black jeans, pulled out the empty chair across from her and filled it without waiting for an invitation. "You looked great out there today," she added, reaching for the easy compliment and hoping against hope they could keep it friendly.
Her pulse picked up, perspiration dampened her neck, and her heart actually fluttered at the sight of him sitting across from her. What had she gotten herself into?
“Didn’t think you followed rodeo, Libby. Things must have changed.” His rugged features may have been schooled into a bland expression, but there was a challenge in his voice.
“People do change, Chance.” Her being here, facing him, should have been proof of that.
“Do they?”
He angled his body toward her, bringing along a musky whiff of aftershave. The same aftershave she’d bought years ago to remind her of him. She tried not to breathe too deep lest the scent launch her traitorous heart into full-out palpitations.
“You’ve changed, Chance. You’re a million-dollar cowboy now.” She’d never have imagined it, though she should have. Chance had more grit and determination than anyone she knew. He’d had to.
“So you think money changes a man?” His gaze traveled down her silky pink camisole, stopping at the waistband of her denim jeans and causing a little shimmer to go through her. How could that still be after so much time?
“Question is, whether the change would be for good or bad,” he added, meeting her eyes again.

Posted by Anne Carrole at 7:00 AM No comments: